I’m always trying out different tools to help Blake be a little more successful, and tips and tricks that will make our lives run a little smoother, without compromising important values we hold. By “values” I mean not allowing crutches or excuses to be used for behaviors.

Blake has a hard time following multi-step directions, perhaps like most kids, and he’s very easily overwhelmed when there are a lot of tasks before him. And by that, I mean more than 1 task!

It’s a struggle when we tell him, “Blake, put your plate in the sink and then go put your PJ’s on”. Usually he will do okay with the first instruction but is lost on what he is supposed to do next. This happens on the daily. Endearing, but problematic, especially at school.

He actually enjoys cleaning, helping, and organizing, but I think confusion, distraction, and being overwhelmed take hold the majority of the time. He folds his own laundry and puts it away, with a break in between, but that’s because, I’m assuming, it’s a related task. Laundry. A few days ago I asked him to clean his room (it’s never really that messy, there were a few Legos here and there, some books on the floor and his PJs spread about) and he just could not dive in and get started. Repeating our instructions works sometimes. Not others. Despite me telling him what to do first and providing one instruction at a time, he was clearly still overwhelmed. Through his frustration, he articulated to me how it was going to take him forever and it was too much to do. (Really, it wasn’t, but to him it was.) He asked me to help him, which I refused but told him I would stand there and give verbal cues. He did not like that answer.

My refusal to help him is because giving in to him when he’s feeling overwhelmed isn’t going to help him the next time this happens. Or the next. However, providing him with a way in which he can independently work through a task like cleaning up his room on his own IS going to set him up for success. And that’s always my goal. Helping him to learn he can do things on his own even if it seems hard.

So, I came up with an idea.

It’s not a novel one. Classroom teachers have done it for years. I’m sure many other parents have as well so I cannot take credit for its originality.

It came to me on a whim as he was frustrated and overwhelmed in the moment of  trying to clean his room. After he put the Legos away he was blankly staring at the clothes on the floor and he just couldn’t process where the clothes went. I think he was so wrapped up in the “When am I going to be done?” question that his clarity was clouded.

I wanted to give him a tool that would allow him to take ownership, be proud, and use a system that would be hands-on for him. I knew he would perform better if he was in charge and had a visual reference, rather than me giving him orders from the doorframe. He needed something with clear expectations that provided specifics. without me having to say, “Put your PJs in the top left drawer then close the drawer” (this one command is essentially 2 instructions in one. Place. Close.) So, unless you say is specifically like that he’s the kid who will leave the drawer open if it’s not stated.

However, by providing a picture it’s a visual that he can refer to for exact instructions no matter how many parts are associated.

I took pictures of his bedroom and his desk (in a different room) when everything was exactly in its proper place. 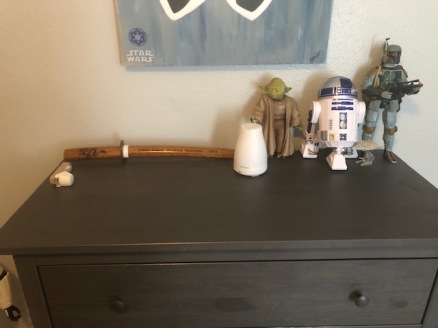 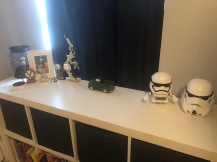 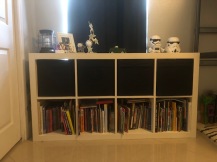 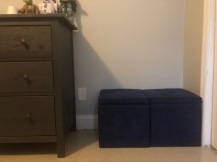 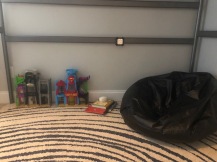 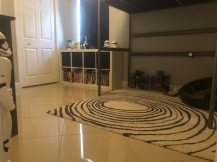 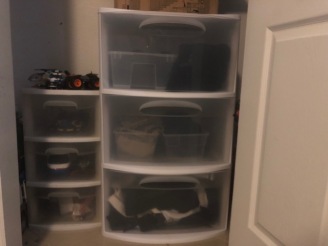 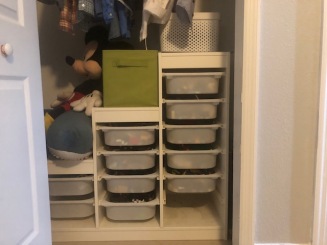 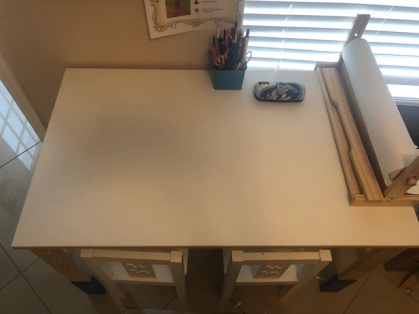 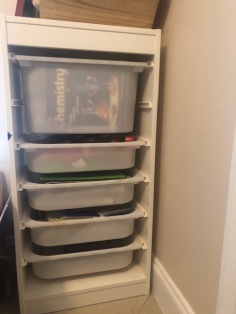 I uploaded the photos to CVS for 1-hour photo pick up.

An hour later, I picked up the photos, attached a magnet and placed them on the magnetic slabs underneath his bunk bed, which served as the perfect magnetic display zone! My goal was so that he could look at each photo, go in any order he wanted (choice factor is always HUGE) to see how the cleaning area should look. 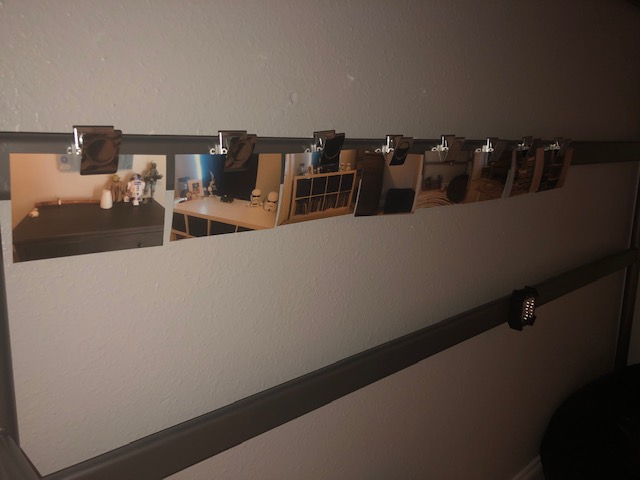 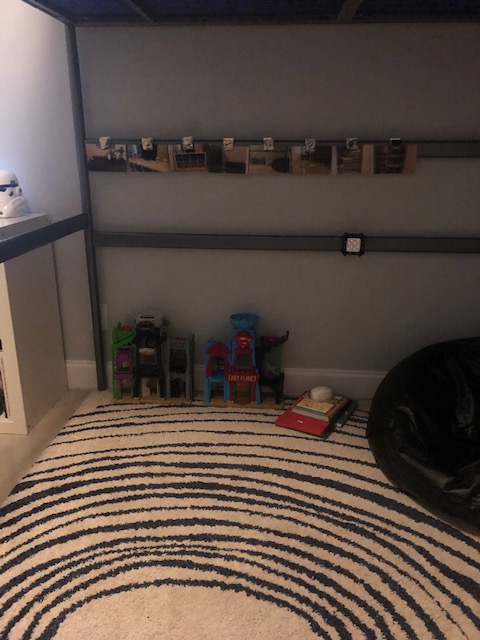 I wanted to use a magnet so that he could move and manipulate the photos. The photos serve as a checklist (which he does very well with) and as he “checks”/compares each photo to the respective area of the room he moves the photo down to the second bar. He continues doing this until all the photos are on the second row. If the area is already clean, he still moves it to the second row to “check” that he’s inspected it for accuracy.

I like this method rather than others I’ve seen where the picture is placed directly on each item/area to be cleaned. This way, he’s being held accountable to manipulate the photos. Plus, I didn’t want to take photos to around the room. I like having them all in one spot where he can easily refer to them in the same location. 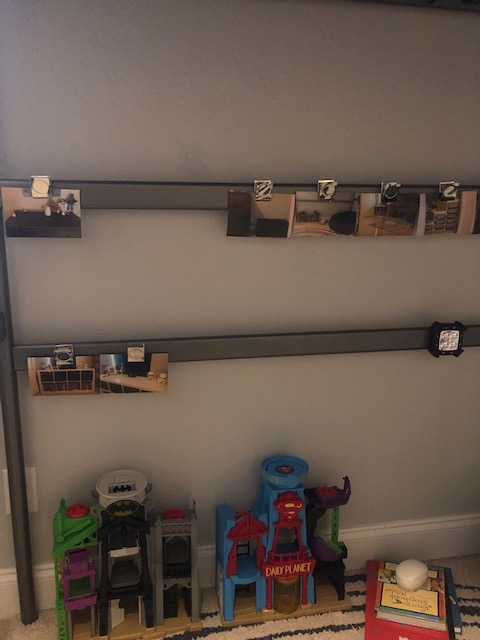 I also attached a picture of what his desk should look like when he’s done using it, notice the photo just above it. 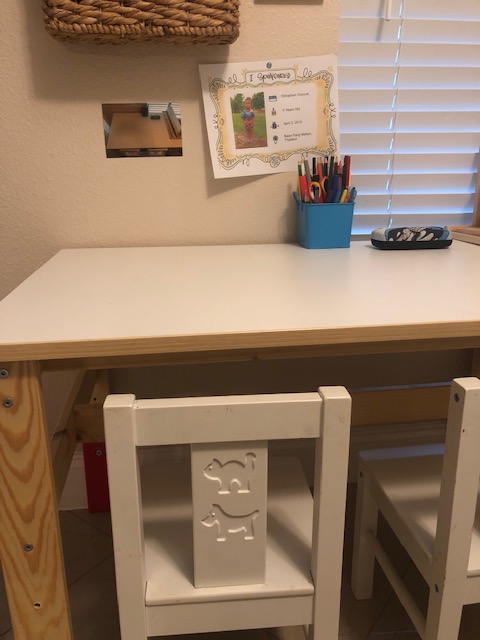 Placing a picture of how the drawers should look became a necessity when he started jamming things into drawers and leaving them half open. Now he will remember to close the drawers to look exactly like the photo.

Doesn’t every kid struggle with this? I’m sure! Still, that doesn’t mean it’s okay. Small bad habits turn into bigger ones later on. Aaaaand, I don’t want him to grow up with an annoyed wife who has to come behind him and close drawers! I want her to say, “Wow! Has he always been so organized, methodical, and clean?” To which, I’ll consider holding my tongue and think of all the work we had to get to that point, but I’m super glad that she’s enjoying the benefits!

(See? It’s all for a purpose. Marry him off and get him out of the house!) 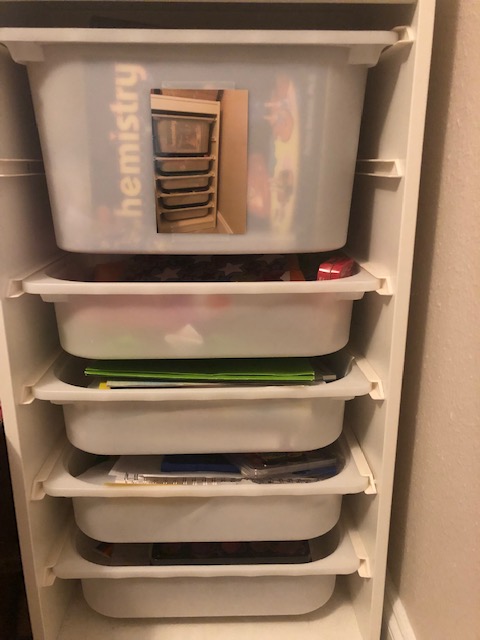 Anyway, to be honest, I’ve been hesitant to implement these types of systems, like photo checklists, at times.

How realistic is it to hang photos to help him complete tasks? That’s not real life! Who else is going to do that for him? So why get into that habit? What good is it going to do?

I’ve struggled with these type of questions. My answer to myself was always that I will be there to support him but in the end he needs to learn to do it on his own because charts and shiny things, and pictures well…that’s not life.

I don’t know about you, but I make to-do lists all the time for myself! It keeps me on track and I can hold myself accountable. I, like so many other people, can get distracted, but having a list keeps me focused on my task.

I’ve been able to start seeing the benefits of things like picture cards.

He’s 5. He can’t read yet. It’s not as if I can give him a post-it note, whiteboard and tell him to make a To-Do list for himself, or make one and have him read it.

The photo cards serve the same purpose, but in 5 year old terms. And for my kid who needs everything to be specific, the picture cards provide him all the information he needs, no questions asked, to get the job done. Instead of expecting him to just clean his room like he “should” be able to, and knowing how much he’ll struggle, I’m setting him up FOR success.

I’m not expecting him to have a teacher who is going to create photo cards for him, neither am I expecting him to use this system for years to come. Likewise, I’m definitely not expecting a teacher or boss to always be hovering in the doorway giving him exact orders like I do/did (pre photos). That’s way more unrealistic than pictures, actually.

However, I am trying to teach him that we all need different things in order to be the best version of ourselves. When you learn a math problem you learn different strategies, and you usually pick the strategy that works the best for you. These photos, like a math strategy, are a tool. It clearly helps, I can see that already. I want him to use this strategy until he finds something that suits him better, or until he’s trained his brain through habit to do this automatically.

These picture cards are the stepping stone to independence, clarity, and a self-esteem booster (because he’s always saying things are too hard).

I’ve used this system with him for 2 days now and it’s worked FLAWLESSLY. He didn’t once complain about picking up his room, and he even went the extra step to make sure his bedroom looked EXACTLY the way it did in the photos, right down to his inhaler being in the same spot and position on his dresser. (We keep it out as our daily reminder since has to have it all the time.)

It’s worked great because there’s no resetting of the photos required at the end. When he finished cleaning his room yesterday all the photos were moved to the bottom. Today, he then placed them on the strip above once they were done, so they just travel back and forth instead of resetting them each time.

If you do not have a magnetic bed as we do, you could use 2 strings hanging on a wall with clothespins. I would recommend something magnetic though for little hands, as they’re easier to manipulate.

These magnetic bar magnets would be perfect along with these magnetic dots for the back of the photos. I didn’t use the dots because I had so many of the square magnets from my classroom that were unused, and I hated to see them go to waste.

I am so happy with the way this turned out, and with how well it’s helped him to independently clean his room without feeling overwhelmed, or getting distracted! I’m of course still there to offer support and guide him, but the biggest success has been his attitude and willingness to do it quickly and efficiently.

Couldn’t ask for anything better!

*This post contains affiliate links. This means that if you make a purchase using these links then I will receive a small percentage of the sale*

One thought on “Cleaning: A Photo Checklist”