Blake is a chronic nighttime headbanger. And I don’t mean the heavy metal music kind. 😉

He’s been banging his head at night since he could lift it up. It’s always concerned us, and we’ve brought it up numerous times to his pediatrician but there was never any worry on their end. Now that he’s over 4 and still doing it consistently, not only to put himself to sleep, but also unknowingly in the middle of the night, and when he wakes up every morning, I’ve kind of pressed the issue a bit more.  He has split his head open several times, causing blood to be on his sheets and on the borders of his bed. He also has permanent scars on his forehead where scabs have not had a chance to heal due to reinjuring.

The headbanging just has never gone away, despite several strategies including lining his entire bed with comforters so he stops banging it against the railing (which helps slightly only to protect his head, but doesn’t prevent it from banging).

The issue is that the banging happens EVERY SINGLE night, and we could no longer accept it as “normal”.

The road we’ve been on to figure all this out and to help Blake, his quality of sleep, and to prevent self injury, is going to require another blog post in itself, because it’s been a lengthy one.

That’s for another time, because, most likely, if you’re reading this, you just want to know how to make this DIY weighted blanket!

Before we get to that, and if you’re wondering if a weighted blanket is for you, please know that I made this blanket because Blake’s Occupational Therapist recommended it. The problem was that I didn’t want to spend nearly $100 on something I wasn’t really sure was going to solve our dilemma (along with some other underlying things we discovered.) So, I set out on a google journey to find a way to save money and make my own! I wasn’t pleased with many of the tutorials I found, so I took a few steps from many and added some of my own, of which is here.

We’ve been using the weighted blanket for 6 nights now, and guess what? His head banging has SIGNIFCANTLY reduced! The first two nights he didn’t headbang AT ALL! *happy dance* The third night he started at 4:30am (as opposed to chronically through the night) and did it for about 10 minutes)-HUGE IMPROVEMENT!)  The fourth night he started again at 4:30am., but only for a short period. The fifth and sixth night he didn’t do it at all AGAIN. I just know his quality of sleep is better. The first night I couldn’t even get him out of the bed to go to school. I think he was probably catching up on years of lost sleep!

My neighbor also made one with me for her 4 year old who has restless leg syndrome at night.  She said it’s helped her daughter quite a bit as well!

If you’re curious if a weighted blanket would help your child, here’s some general information that may help you decide.  The blankets are great for sensory input, those with sensory processing disorders, anxiety, and more.

Now that I KNOW the blanket works for us, there’s really no reason for me to spend the $100 on buying one, because…

Ready to try one for yourself?

What you need to know:

If you understand, are okay with, and know which method you want to use for creating your blanket (using the duct tape as weight or subtracting it), then you’re ready to get started!

Cost: About $33.44. Because I recruited my neighbor for help and she decided to make a blanket too, we went in half on all project materials. I bought both blankets  and rice, and she bought all the duct tape.

Lay flat one of the fleece blankets and line it with the ziplock bags. This is just going to give you an outline of how many you will need. I did 5 rows of 6. You want space in between to create “holes” so it’s breathable.

You will need to figure out how much rice to put into EACH bag, based on the weight you desire. Weight divided by number of bags=cups in EACH bag.

Once you figure out the conversion, fill each rice bag and lay back down on the blanket. Apply a layer of tape horizontally across the first row. Be sure all rows below have the bags lining up as best as you can. It’s okay if the tape touches the blanket. This is not permanent and will easily peel away later.

Cover the bottom parts of each bag with tape. (In the end you are going to cover up all parts of the bag with duct tape to prevent puncturing and rice floating around in your blanket!)  Create a grid, leaving square in between the bags as open pieces so that it breathes. Build up the perimeter of the tape for added thickness, about 2-3 layers of tape. Patch up any loose pieces of rice that you see. (Note: If you find that some of your rows are off center during the process, just cut the tape, re-position, and retape in between. Easy trick!) 😉 Basically, you’re creating a rice blanket. 🙂 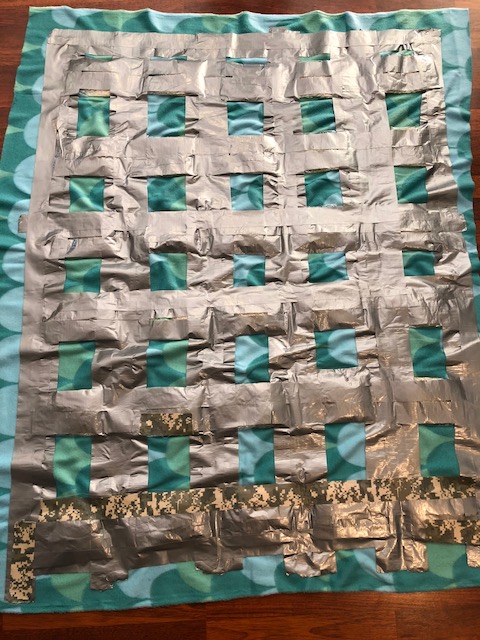 I called this step “building up your edges”. So, build up all 4 corners to look something like this. Extending the tape diagonally to the corner of your blanket. You want the tape to extend from the gridded part to the outter edge. Eventually, this will become part of the tie on the edges that holds the interior rice blanket in place.

You should also build up your edges in between the 4 corners in the middle of all the sides, just to secure the interior rice blanket even more.

Flip the ENTIRE blanket over with the fleece SIDE UP -this is why you taped the rice blanket to stick to the fleece-(do NOT attempt to just start peeling the duct tape!). After you’ve turned it over and you’re seeing nothing but fleece, begin SLOWLY peeling away the tape from the fleece. At this point you are going to reinforce the tape on the opposite side that you already taped. We peeled it back one row at a time, secured with tape, then peeled back another row, and so on. You don’t want any sticky parts exposed! Cover it all up!

The best way to do this, in this case, was to measure out the height of the first row. Then, we used that measurement to precut the rest of how much we needed, slowly peeling the layer back to lay down the height. Then, we went back, measured, and laid down all the leftover pieces. Basically, you won’t anything that is sticky on this side, to be covered with duct tape.

When finished, you should have a complete rice blanket front and back that is laying on the floor with no blanket above or below it. Fill any holes, and be sure edges are thick in width, as these will hold to the blanket to ensure it doesn’t move around. (This picture does NOT show the built up edges that are in previous step.)

Now the fun begins–securing it all together!

Fold the duct tape in half, and using scissors, cut a small hole into the middle of the tape. This will create a slit. You are then going to pull both corners of both fleeces through the slit (feel free to widen it slightly to fit-but not too much!) and tie them together in a double knot through the top of the slit/hole.

Now we want to cover up those yucky looking edges. No one wants to see the duct tape! Simply fold and tuck the tape and blanket edges in and voila! This works you guys! Like I said, my son has been using this blanket for 6 days and they haven’t popped out at all! NO SEW! Press, and flatten. Repeat for other 3 corners.

You will treat these in between edges that are built out slightly differently, because they will eventually blend in with the edges you will create in the next step.

Holding the the blanket and duct tape securely in your hand, cut both fleece blanket pieces that cover the duct tape edges to the exact size of the duct tape edge. Meaning, you will have the same sized square hole (like the one pictured below) going through the top fleece, tape, then the bottom fleece.

The best way to do this is to first cut them all the same size, and then fold them all UP, and  carefully cut on the fold.  All 3 pieces will look like this, -including the two blankets along with it.

What the tape will look like on the inside… 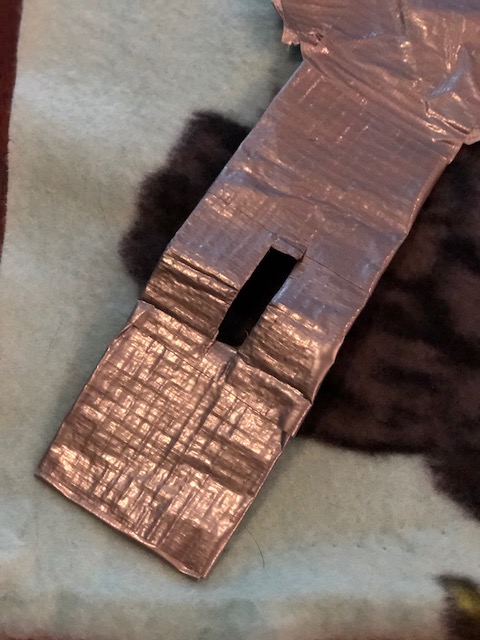 Create a knot by feeding the ties in through one another.Turn all 3 parts up and slide them down through the slit. Pull. Double it if you prefer. It will stay!

Repeat for the other 3 sides.

From here, you can either take the two pieces and tie them together or cut slits in them and pull them back through one another, just as you did with the edges in Step 10. I did Step 10 because it was much easier.

By using the slit method and pulling the blanket through, I can easily undo one side of the blanket and throw the fleece parts in the washing machine by simply untying all of the edges. This is much easier than untying a bunch of knots! In the end, it’s up to you. I was just trying to think ahead. 🙂

Cut the slits again by folding both pieces up and cut along the fold.

Pull both pieces UP through the hole and back down. Tug slightly to be sure it’s secure. Repeat along the entire blanket. 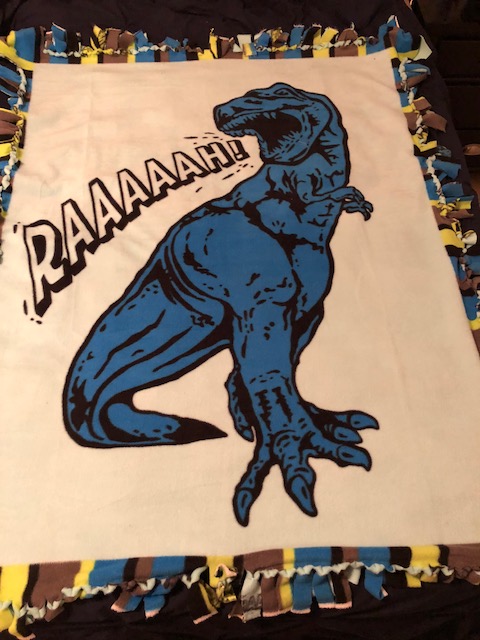 I used Blake’s regular comforter first and then laid this on top of it, just as extra padding.  You will hear the rice inside, but it doesn’t bother Blake at all. I have found that he hardly moves at all when sleeping, when he was so restless before. I’ve been waking him up on my work days in practically the same position he was in when I put him to bed! It’s been so amazing, the difference!

Interested to know if this is something you think may work for you.

Feel free to ask me any questions along the way. I’m happy to help!

*This post contains affiliate links. This mean that if you purchase anything through them then I will get a small percentage of the purchase sales* 🙂