I know magnetic tiles have been all the rage for many young kids.  I never purchased any for B because he’s always been so into Legos that I never gave them a second thought.  Also, every time I’d look into purchasing them I was a little bit in sticker shock!

We were playing at a friends house recently and he took to playing with their set of magnetic tiles, so much so that it was hard to pull him away from them when it was time to go!   My friend encouraged me to check Amazon for some companies who sold them for less than larger name brands.

I came across this set and immediately ordered them. Thanks to Amazon Prime, they arrived the following day!
Check them out!

B spent the entire day playing with them, building houses, castles and churches. He even incorporated his Legos into them, building a fence for his police cars.

I wish I’d ordered these sooner for him! He really loves anything where he can use his imagination to build. I’m going to order another set soon because he wants to make several large structures.

I love the Skymags set because it has 100 pieces, plus comes with a platform that has wheels so a vehicle can be built.

It also opened up a conversation about using shapes to build other shapes. Here, we used 2 triangles to make a rhombus, a larger triangle, and a square. 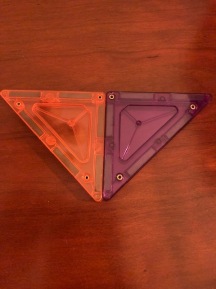 B really had fun figuring out what other shapes he could make.

I can tell these are going to become a favorite building toy of his, and I love that he’s incorporated his love of Legos into it as well.

I wish I’d found them sooner, but better late than never!

*This post contains affiliate links. This means if you make a purchase through one of my links then I will receive a small commission*