Sometimes I don’t know what to call it or what to blame when Blake struggles with certain social situations, or events.  Sensory Processing Disorder? Asperger’s?  Life with kids? Typical 4 year old?

I struggle with this, because I want it all to fit into perfect little categories. I want to be able to say that this behavior is SPD, and this is the Asperger’s, and this one is just a 4 year old.

It isn’t that easy, unfortunately. And oftentimes I just question it all.

This is the journey of parenthood though, diagnosis of anything or not. If I weren’t typing this as a “mom of a kid with Asperger’s”, then I could very well type the same sentence as a “mom”.

I don’t pretend to go through any struggle that any other mom doesn’t. We are all in this momming thing together.

But right now I type this as a thankful Aspie mom. Specifically, thankful to Amway Center for the smiles they gave us at the game today, otherwise, we would’ve had to leave early.

We took Blake to his 3rd Solar Bears hockey game. The first time we went a few months ago he did pretty well. We were in a middle section and there wasn’t anyone around us. We didn’t even bring headphones, something we usually do in loud arenas, for his noise sensitivity. He did need breaks quite frequently that had him up and moving and away from the noise, so he spent quite a bit of time away from the game on a bathroom break, food break, shopping break, and just scenic-walking-around-break, but, overall he did really well. We were impressed and knew that we wanted to attend more games with him.

For his second hockey game, Michael took him on a father and son date. Sadly, it went very different from the first game, and they ended up not staying for the full game. Blake was cranky, crying, didn’t want to stay, kept asking when it was going to be over, and couldn’t sit still.  This may seem as typical 4 year old child behavior, but today we were able to understand a bit more and gain some insight into why both games went so differently.

We decided to give it another shot by attending the 2nd game of the play-offs this afternoon.  When we walked through the doors of the Amway Center, which was more crowded than usual (play-offs), he started acting really goofy-something he does when he’s uncomfortable or is anxious. He went into a baby talk, started walking in huge strides while holding both our hands, and stuck his tongue out while swinging his head back and forth. Got that image? I’m not sure what picture you have in your mind right now, but if it looks like a 4 year old Herman Munster shaking his head like a heavy metal rocker while clogging his feet, holding 2 adult’s hands with his eyes closed and his tongue sticking out, babbling like a 1 year old, then you’ve got the right idea.

This happens frequently when meeting new people or when he’s in a different social group setting. (Where’s the smacking forehead emoji when I need it?) No one wants to say they get embarrassed by their kid sometimes, but, it happens, people.

We finally settled into our seats, which were right up on the ice! There weren’t many people around us, and as we waited for the game to start we snapped some cute photos! 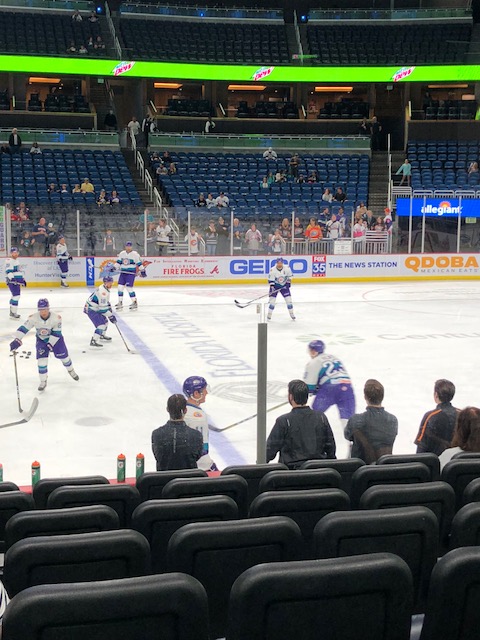 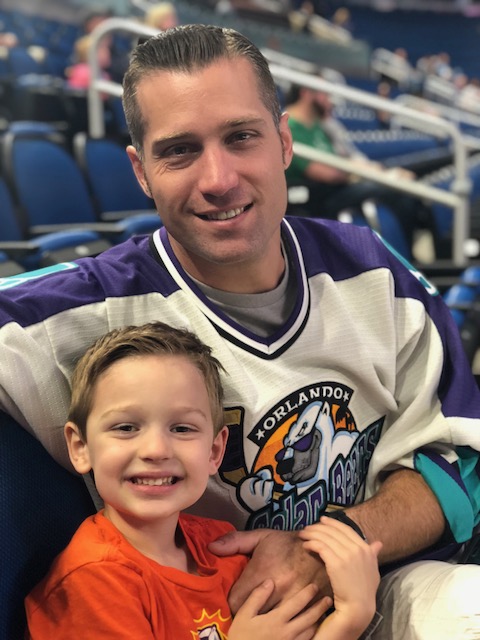 Look at how great our seats were! Right up to the action!

Once the game started, more people started filing in and Blake’s whole demeanor changed. He curled up in his seat and started crying. I tried cuddling with him for a while, then Michael tried. He went back and forth between being angry and being sad. This went on for about 30 minutes.

That seems like a long time, but we were hoping he would snap out of it. We aren’t that easy to give in, and we really want him to try new things, but at one point he started crying hysterically, curled up in a ball on the seat, trying to cover his ears AND eyes. I asked him to verbalize what was wrong and he finally said it was too loud. Michael and I chatted and figured it was all just too much for him being that close to the ice. No talking or amount of cuddling was working, so we decided to ask Guest Services if they had any headphones, by chance. Usually the noise reduction will work for him.

So, we took a family field trip to Guest Services and told them what was going on. This is where the RAVE comes in for Amway. They said they could move us seats all the way to the top of the arena where the noise wasn’t so intense. We knew that would be a better option. But they also went on to tell us that not only did they have headphones, but entire sensory bags! They asked for my ID and held on to it, to ensure I’d return the sensory bag when we were done, then a gentleman escorted us to our new seats!

We were in the very top row of the whole arena, and there was absolutely NO ONE in our entire section.

Once we started using the items in the sensory bag, got away from the crowds and noise, Blake turned into a new kid!

The sensory bag is amazing you guys! Michael and I couldn’t believe it, and Michael even made the suggestion that we create our own sensory bag and leave it in the van for when we need it. Brilliant, that husband of mine. 😉

Here was the bag Amway let us borrow. 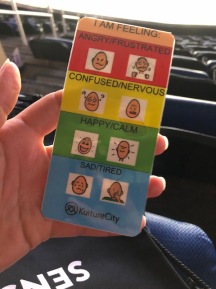 Blake doesn’t need the non-verbal cards, but I loved that they were in there for a kid who would need it!

He used every bit of every fidget toy the ENTIRE time, and it really took away his anxiety.

I’m so impressed with Amyway and so grateful they moved us seats. I’m not sure he even would’ve been okay with us staying in the first section we had, even with the headphones, because I think the crowd of people that came, and just being that close to all of the action, was a bit alarming for him.

For anyone who is unsure about attending an event at Amway with a special needs child, I encourage you to give it a try and to not be shy about utilizing Guest Services for any thing you need. I was sure to tell them how appreciative I was at the end, because I know we would’ve left for home much earlier-but we were able to stay right up until the very end without any problems.

Looking back, Michael said that Blake definitely experienced sensory overload at the last game they attended together, but he didn’t realize at the time.

We are still new to all of this, figuring it out. I’m so glad we didn’t leave, and asked for help.

Be an advocate for your child. Speak up. Ask questions. We want so badly for Blake to be able to experience things without any of this preventing him from doing so.

You made that happen for us today, Amway.

I came home and ordered some items to make our own sensory bag. I’ll blog about it when everything comes in!

Thank you SO much Amway, and Kulturecity.org (the makers of the bags) for helping us make memories this afternoon.

Sensory bag to the rescue!

In slightly other news, Blake has a sedated MRI scheduled for this Wednesday to scan his brain. The neurologist is still ruling out some things since he’s still struggling with headbanging at night, though not as frequent. This all seems to be related, so the journey continues! What a trooper this kid is, you guys!