When we spent our first Christmas together as a family of 3, Michael and I talked about what kind of traditions we wanted to start with Blake. We didn’t come up with anything to implement right away (what can you do with a 1 month old, anyway?)

Though we’d talked about it over the past few years, we hadn’t really started implementing a lot until this year.

When we decided to put our tree up the week after Thanksgiving I was so thrilled for Blake to finally be a part of the decorating. I had this perfect vision in my mind of the 3 of us decorating together while listening to Bing Crosby blaring through the house. We would laugh, sing, and B would looooooooooove placing the ornaments wherever he wanted.

Truth: Unfortunately, my excitement of us all enjoying Christmas music while reminiscing about ornaments and sharing that with our 3-year old was thrown out the window within the first few minutes of taking the tree out of the bag from the garage. He couldn’t have been any less interested! Michael and I tried so hard to get him excited about decorating the tree, but he was way more interested in jumping on the trampoline and running around the house.

I could see how a bunch of breakable ornaments placed on tree stems could seem boring for a very active boy!

Elf on the Shelf

Yep. We’re in on it, too. Our Elf on the Shelf is Hans.  Honestly, I was really against getting one for the longest time. Partly because everyone had one, and I was rebelling against the trend. 😉 The other part of me was lazy and didn’t want to put all of the effort into elaborate set-ups nightly. Therefore, we decided we would purchase one on the condition that we didn’t stress ourselves out about it. I found one on sale, and we left the stress at the door. We made up our own fun with Hans. Rather than stressing over repositioning him nightly, we only move him around when we think about it, and it becomes a “Where’s Waldo-esque” game. Blake gets to search for him around the house. Hans finds himself in some tricky positions, but it’s never elaborate or too intricate. It doesn’t require any supplies or much time. He’s just stealthy and sneaky. Must be due to his special forces training. 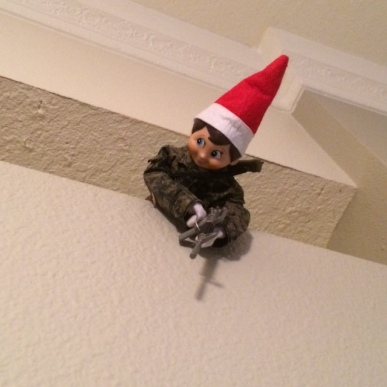 I really am impressed with those of you who go all out for your children with the Elf on the Shelf. When I scroll through my newsfeed and see what you’ve done, and how often, I am in awe. I think it’s wonderful! I just knew I couldn’t, and I knew it would stress me out to know my schemes weren’t as good as the potential, so we had to change it up to suit our family.

Truth: Sometimes B gives up after about 15 seconds of searching, and the fun disappears for him. But, it’s okay. We wait the next day, or when we remember, and we try again.

We’ve really been having a lot of fun with Blake this holiday season, introducing him to new things, and having more in depth conversations with him. Each stage he goes through just gets better and better! Three is such a fun age! We’ve been talking to him a lot about Christmas and its true meaning. That it’s not just about Santa and giving presents, but it’s also Jesus’ birthday! I love that he already knows about Jesus and has this great love for him. He calls us back into his room each night if we forget to say prayers, and he won’t eat dinner until we say the blessing.

I took some time explaining to him that not every kid gets presents for Christmas because their moms and dads don’t have a lot of money. So, together, we cleaned out some of his toys and he agreed it was okay to donate them to other little kids. He even offered some of his cars to be given away, which is pretty major for him since they are his favorite. I love his kind heart!

Each day we place a piece of the nativity scene on our Advent Calendar. He’s grasping so much, and asks every day if it’s time to place baby Jesus yet. 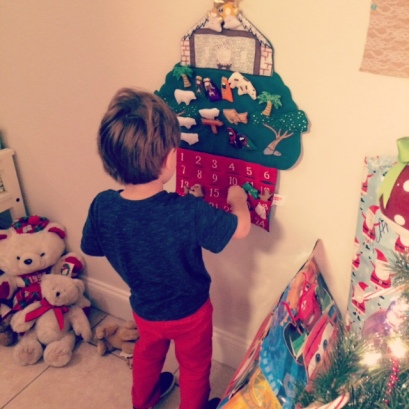 We also made salt dough Christmas tree ornaments! They are made with dough, harden, can be decorated, and they last for years!

-Toothpicks or a straw

-Rolling pin (though we didn’t use a rolling pin. We just flattened it out)

-Cinnamon, as much as desired (optional)

I purchased all ingredients from the dollar store, except the acrylic paint I used. I already have loads of that on hand.

Our neighbor friend came over to make them with us! 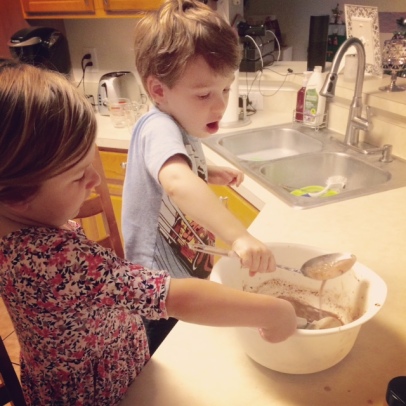 We let the kids take the lead, so they don’t look exactly perfect. I think that’s the beauty and the fun in it. Though, it’s hard not to just take over! I love that the final product truly looks like a 3-year old did it! Great memories for years to come! 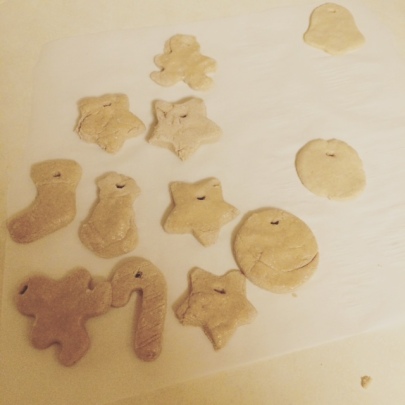 He said he wanted to make ornaments for his teachers, including this year’s and last year’s, as well as various family members.  He chose his own paint for all of them and decided which shape each person should get. 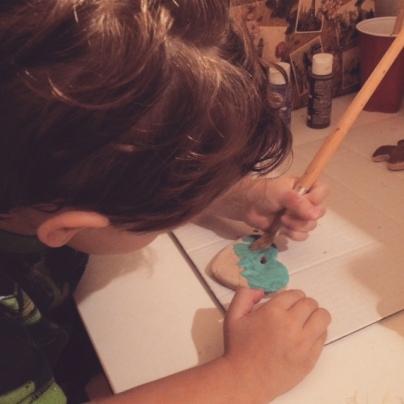 After he painted he decided he wanted glitter on most of them, so glitter it was! 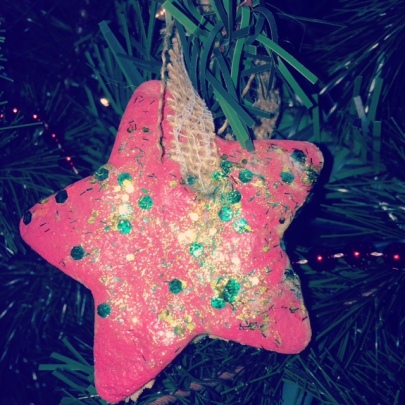 Aren’t they cute? Super easy, and he had a lot of fun doing them.

Please know the baking time isn’t an exact science. The time will vary depending on the thickness of the cookies you made. Check them after an hour and if they are soft at all then you will need to place them back into he oven. We had to bake ours for almost 2 hours because they were pretty thick! I recommend baking in 15 minute increments after the hour and a half is done and they aren’t finished.  Consider turning them over to bake additionally if you find the underside is also mushy. They should be rock solid.

If you overcook them, don’t worry! They’ll just be a dark brown color, but you’re going to paint over them anyway!

9. You will need to let them cool completely before decorating them. Ours took almost 2 hours to cool, but because it was nearing bedtime, we just waited until the next day.

10. Enjoy decorating with paint and glitter! You can use a can of poly spray paint after painting to seal it.

They make great gifts for teachers or family members. Personalize by putting dates or a handprint on the back!

Truth: It took us 4 days to actually complete this because, as much as he enjoys painting, he could only sit still long enough to paint 1-2 at a time, and they had to dry before placing the glitter. It was a multi-day decorating plan for this kid!

I knew decorating a regular gingerbread house wasn’t going to look interesting enough for Blake, so I was thrilled when I found a gingerbread train walking through the store!

He had fun putting it together piece by piece, bite by bite, then a piece, then a bite…

…you get the picture. By the time it was all put together there were large chunks missing, and one train only had three wheels! Oops.

How many food groups do you think are in a gingerbread kit? Because this was his dinner that night.

Truth: There was a lot of re-directing him on my part to get him to sit and actually complete this with me! He wanted to do a little, get up and play, then come back, then get up and play. I still don’t quite know what’s “normal” concentration for a 3-year old, but I find myself always wondering and worrying about his ability to stick to tasks for any lengthy period of time. Though it doesn’t present a problem when he’s playing with cars, or playing outside. He could do that for an hour!

But, he had fun decorating the trains. That’s what matters! 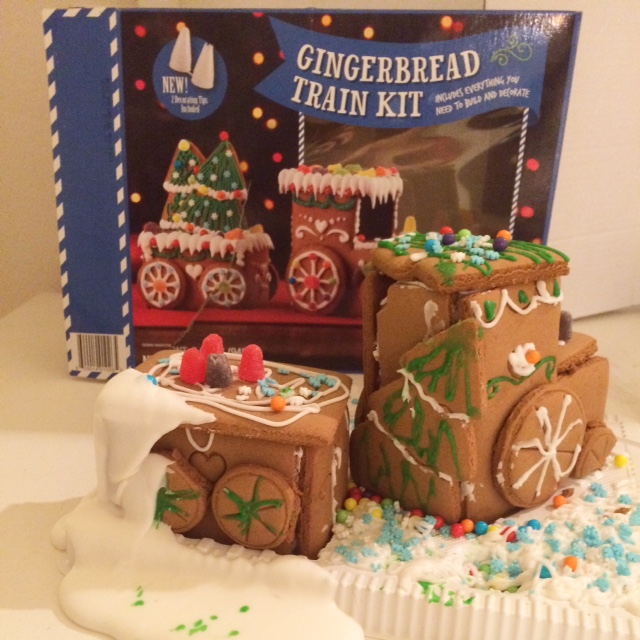 Today we had fun with our best neighbor friend making cookies from scratch! They got to roll, bake, and decorate their very own cookies with icing and sprinkles. Dipping the knife in the icing and eating large globs of it was, of course, the best part. 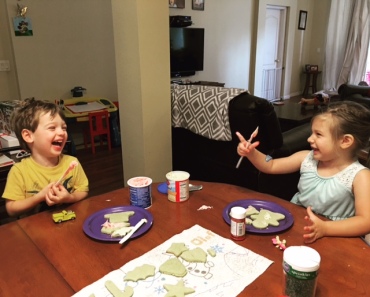 Truth: About 5 minutes was spent decorating, then they started running around the house doing laps. Surprisingly, they enjoyed rolling out the dough and using the cookie cutters more!

The Christmas season isn’t over yet, and we’ve already had loads of fun and laughs! I’d love to hear any other holiday activities and traditions that you enjoy with your family! Especially ones that will keep an active boy interested and engaged! 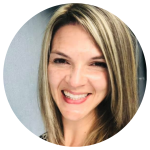