My husband and I now have a fully potty trained 2.5-year-old toddler in our midst! And oh does he look so cute in his Mickey Mouse or Lightning McQueen big-boy underwear! The money saved on not having to purchase diapers is nice, finally. Even better, was the ease of it all. No stress has been my philosophy!

Ain’t nobody got time for that. Seriously.

Potty training can usually be a stressful time for parents and kids. You’re ready, they’re not. You ask them “Do you have to go potty?” and they fervently answer, “NO!” Their stubbornness kicks in. Your frustration boils. You may drag them kicking and screaming to sit on the toilet. You feel like you’re acosting your own child just to get their pants down, only for them to, seconds later, run out of the bathroom the moment your grip untightens, and there they are, back to what they were doing when you interrupted. Only now, they’re half naked.  The battle often looks like an MMA brawl in your own home. And you’re the one who feels beaten and is disheveled. You lost.

Or maybe your child’s resistance isn’t felt as strong, but it’s there. It’s present enough to make it stressful.

I think a lot of parents make the mistake of trying to train their child too early, when they simply aren’t ready. Pushing your child into this means things are already starting off badly. Now, I’m normally a fan of “The parent is the boss” philosophy.  Don’t want to clean up your toys? Too bad! Do it anyway. You made the mess. You want to continue playing with your cars while we eat dinner? Sorry, it’s dinner time and we’re sitting together.

The other mistake is just stressing over it all. That what my mistake in the very beginning.

There are certain circumstances when we have to allow our child to reach milestones when they’re willing, open, and developmentally ready. You didn’t force your child into walking. Most likely they surprised you one day by first standing, then months later, they took their first steps toward you.

Why isn’t potty training treated the same way? There is an added benefit to saving money on diapers. But I honestly think the main reason we stress over this so much is the comparing society that we live in. Your friend has a kid around the same age as you and HER child is fully potty trained. Your kid must be behind. You clearly haven’t been working hard enough to potty train yours. Everyone keeps asking you and you hang your head and say “We’re working on it.” Even though it’s a fight every time you try. You may have even give up.

Or, if you’re like me, then your answer was more lengthy and nonchalant: Life is stressful enough as it is, and I just don’t have time to add the stress of potty training to the long list. He’ll be trained when he’s ready, not when I’m ready. I’m not even pushing it.

Ugh. Moms are so rude sometimes. Get over yourselves, people.

Own up to your decision to give up, or to not even start. Laugh it off. “I gave up. He isn’t ready and I’m over fighting him about it.”

Blake has been the last one among his friends to be potty trained.  It is what it is.

Call it lazy-parenting-syndrome, if you like. I’ll take it.

I’m not a mommy expert, nor am I a potty training expert, but I do know what worked for our No Stress Potty Training. And if you’re on this crazy roller coaster ride of parenting, and you’d like to attempt to scratch one milestone off your list that doesn’t have to be stressful, try the I mean, No Stress Potty Training approach. 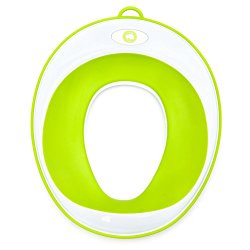 When you’re just starting, do not to stress too much during the week when they’re just getting the hang of it. You’ve already had a long day at work (most likely), and they’ve had a lot day at school. The few hours you have with your child in between picking them up and bedtime are few. Try to make them positive! If the training is a fight in the evenings in you’re home, just let it go. Continue to ask, put those pottying time routines in place that you’ve begun (bath time, etc) and let it go at that.

Breathe. They will get there eventually.

There’s no magical formula. I feel this method is just very organic. That’s such a hot topic word right now. Trendy, even. (Which are things I try to stay away from, but it’s so fitting here).

There are so many things we can’t control about parenting when it comes to our kids. But I think we take for granted all the things we CAN control. The best way to take control, sometimes, is to not let the situations control US. Sometimes we need to choose the easy road. Even if to save our sanity. Choose less stress.

Whichever way you potty train, be sure you  have more time spent with your little one that doesn’t involve meltdowns. There are enough of those as it is!

Lastly, just DON’T.STRESS. It isn’t worth it.

If you have any other non-stress potty training advice, please do share!

3 thoughts on “No Stress Potty Training”