For a week I had been preparing Blake for the change.  I told him about his fun new teachers and sweet new friends he was going to meet.  I wasn’t really sure if the conversations I was having with him were going to help, but I talked about it anyway. Especially on the drive home from his old school.

I really think parents underestimate the comprehension level of a child.  We have always had full blown conversations with Blake, and never used baby words or grammatically incorrect sentences. I don’t know if it’s helped or not, but I like to think it has.

By Sunday night he was talking about his new school already and his new teachers.  During nighttime prayers with B we prayed for the teachers, the students (his new friends), and even the parents of the students, that they would be raising Godly and kind students who were going to be good influences.

I didn’t sleep well Sunday night.  I was secretly a nervous wreck over him starting somewhere new, after having been in the same daycare for his entire life! On Monday morning, as I was getting him ready for his day, I continued to have the conversation with him about his exciting new day-with as much enthusiasm about it that I could muster. He even began to get excited!

As soon as I pulled into the new daycare that morning his said “This my new school?”, and I was instantly glad that I had those conversations with him.

I’d half prepared myself for the meltdown that was sure to occur when I dropped him off, knowing I was going to have to pry him from my arms when I had to leave for work.  As we walked in to his new building, and into his new room, where he didn’t know a single person, he spotted a police car toy on the floor and wiggled out of my arms to run straight to it. That police car toy was a blessing.

And that was that.

On the floor he made police car noises, repeating “Police car! You gonna go fast!” As I stared at him across the room, amazed at his independence (where’s my baaaaaaby?), he looked up at me and asked “Kisses?” So I walked over and planted one right on his lips. (To his Blake’s future wife, those will ALWAYS be MY lips!!) We hugged and I started to walk out the door when he yelled to me from the carpet, as he was surrounded by toy vehicles, “I love you, momma!” with his big brown eyes, then looking down, continued to play with his police car.

…Quick time out. I freakin’ love my kid. He’s seriously THE most loving child on the planet. He gives hugs and kisses on demand, and he says “I love you” without prompting. And he ALWAYS says “I love you, too” when you first say it to him.  IT’S THE BEST THING EVER!…

I was relieved that he was instantly comfortable in his new environment. Admittedly, a little saddened that he wasn’t going to miss me, and that he was completely independent in this foreign place.

I thought about him constantly throughout the day. Wondering how he was. Was he crying? Was he adjusting? I couldn’t wait for work to end so I could rush to pick him up and hear all about his first day.

When I walked through his classroom door he bolted into my arms. Those are the moments when, as a parent, you could die right then and there and it would be okay. In the car on the way home he communicated the different things he’d done throughout the day. Art (one of his favorites) and playing outside (another favorite).

I never doubted our decision to switch his daycare, but the whole process was stressful, and I did question myself a few times about it. (That’s a little contradictory, I know). But, all of my self-doubt was removed after I asked him one question.

As soon as we arrived home I fed him his regular snack. As he was eating I continued to ask him questions about his day. The conversation:

Blake: Yeah! Johnny’s not there.

Immediately my heart sank.  “Johnny” (pseudonym) and the actions that took place with Johnny were ONE of the (three or so) reasons that we left his old daycare.  Johnny was very aggressive toward all the kids in class, not just B. Biting, hitting, pushing, throwing things. Not talking just one time instances, but multiple times over MULTIPLE months.

The fact that Blake communicated this, and seemed to recognize that he had a great day with his great friends BECAUSE Johnny wasn’t there, spoke volumes.

It broke mine and Michael’s heart, and we regretted that we hadn’t made the switch sooner.

Today was his second day and he seems to be thriving. No outbursts of any kind.  We are thinking that his anger outbursts that were previously told to us at his old place were a result of things that were going on in the previous place.

I can’t dwell on not having made the decision sooner.  I’m only thankful we did, and that he’s happy and loving the new place!

Today he brought home some work he’d done in class in the form of some worksheets.  I love to see what they are doing and be able to reinforce it at home.  I decided to make a quick, easy, and decorative display that we could easily spend just a few minutes on at home to review. Blake has an art table set up in our living area where we paint, color, and do play-dough (or whatever else).

I took a piece of burlap ribbon that I had and pinned it to the wall just above his table. I then took paper clips and displayed his work. It can easily be changed out weekly, or even daily if I desire. 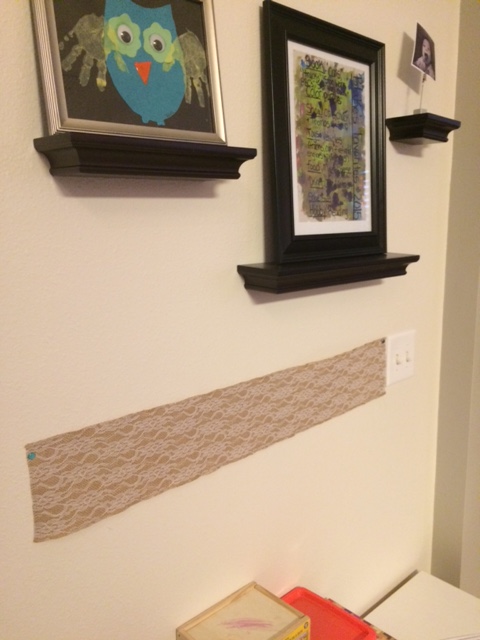 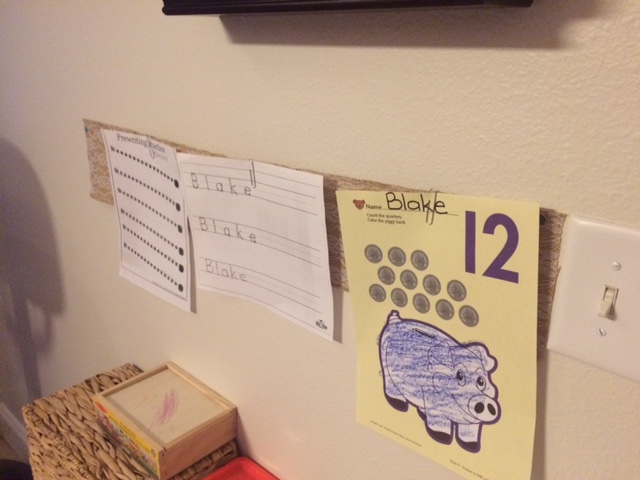 I like the new routine I’ve started with him. He comes home from school, we watch a 30-minute episode of a show of his choosing, which is usually Daniel Tiger or something Mickey-the-Mouse related (which is what he calls him), then we spend just 5 minutes going over his work for the day (which today consisted of counting to the number 12, identifying quarters, and reading his name), then we spend the last hour of the evening outside. Tonight he chose to ride his bike around the street.

Then we came in for dinner, had our bath, read, said prayers, and went to bed.

I just feel relieved about everything. I feel like a weight has been lifted. I am so grateful to all my friends who have been praying with me over this decision, and who have been encouraging me along the way, reassuring me that I am not “crazy” and that I was just doing what was needed for my kid.

My advice for other moms. YOU know what is best for your child. I only wish I had listened to my gut months ago. You are the BEST advocate for your own child, no one else. When your voice isn’t heard, and you feel strongly about something, then you are the only one who can do something.

You are not a crazy mom.