God gave me you for the ups and downs

God gave me you for the days of doubt

For when I think I’ve lost my wayThere are no words here left to say, it’s true

God gave me you

(For those familiar with the song, I just feel the need to point out that this was not original to Blake Shelton, but was first written and performed by Dave Barnes.  Okay, I feel better now)I think of Blake (my Blake, not Shelton) when I hear that chorus.

He had his 2 month check-up today and received his shots.  He was a trooper, considering.  When he cried in pain, so did I.  It really is difficult watching your child get poked and prodded.
I’ll admit I’m one of those parents who is concerned about a link existing between vaccines and autism.  It’s such a hot topic right now.  I debated over even getting him vaccinated at all.  That idea didn’t last long in my head.  My next decision was picking and choosing which vaccines to give him.  I wasn’t comfortable with that either.  I mentioned my concerns to Dr. S. and he was very open to speaking to me about this, not for a moment being judgmental.  He said he’d done a lot of research on this topic during his residency (he’s a new pediatrician, which is why I enjoy going to him because he has a fresh perspective of everything).  He talked my ears off about the whole thing and mentioned there was a doctor in the U.K. who did a huge study on the possible links between vaccines and autism, and fraudulently tipped the research in his favor in order to “prove” something that he felt strongly about.
Here’s one of the articles talking about this.
Report Linking Vaccine To Autism Was Fraudulent, Says British Medical Journal

Between my own research and the expertise of Dr. S, I felt confident in going through with his vaccinations.  I am, however, going to keep a close eye on him to monitor any changes.  Actually, Dr. S mentioned doing the same.  He said that if I notice any changes in his behavior to call him.  I know I’ve mentioned before, but I really like him a lot.

Is it crazy that I considered keeping his bandaids from his vaccines for his baby book?  When I removed the bandaids from his legs I set them aside to hold on to, then wondered if that was a little kooky.  They DID have blood on the back of them.  I ended up throwing them away, but I first took a pic of one of the bandaids on his chunky little thigh.  Daffy Duck! 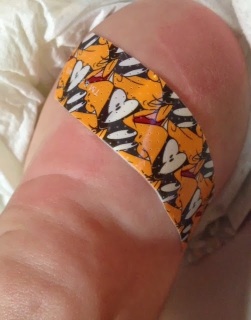 He had 1 bandaid on his right leg and two on his left. This was the only one I snapped a pic of.  The other bandaids were of Bugs Bunny.

Blake is 24.5 inches tall, placing him in the 75th percentile for height.  He weights 11 lbs, 11oz.  I asked him if he thought he was overweight, since that was what the last doctor said, but he said he’s not overweight at all.  His exact words were “he’s long and lean.”  Just like daddy!
He is still eating 4oz on average (sometimes more, sometimes less), and continues to do so every 2 hours like clockwork. (Though he’ll go longer at night, thankfully!)  He did say he wants me to try to space this out to at least 2.5-3 hours.  The fact that he wants to eat so frequently is another sign/symptom of the GERD, as he may be wanting to eat because the feeling may be soothing sometimes when he swallows.
I don’t know how I’m going to stretch out his feedings to 2.5-3 hours.  Sometimes he’s hungry again at an hour and a half and stretching him that extra 30 minutes is torture for him. I try to give him the paci to soothe him until it’s closer to time but he hasn’t really wanted much of his paci recently.  I just really don’t think my ears can endure the screaming for the 30 minutes to an hour that I’m supposed to wait for his next feeding.  If he’s not gaining too much weight then what’s the harm?  Oy-vey.  I don’t know!

Now that Blake has been on the probiotic for nearly two weeks, I truly feel that it’s helped quite a bit!  He still manages to have some incidences of uncomfortableness during his feedings, but I do not feel they are as frequent.  I’ve been able to cut the fussiness down during feedings from several a day to generally once a day.
Dr. S said the probiotic in his formula was an excellent idea and he was impressed I was doing that.  (Of course I can’t take credit.  It was because of the suggestion of others. So, thank you!)
He does want to increase his dosage of Zantac from 2 to 3 times per day, remaining at 1.1 mL.  Ideally, he shouldn’t be experiencing any uncomfortable feedings, so that’s our end goal.  If there’s no improvement by his next appointment then we are going to see a specialist, a gastroenterologist.  He confirmed the severity of his GERD saying that we can only hope that he outgrows it.  I truly hope so!
I also hope I don’t forget to give him his Zantac.  Remembering to do that and everything else can be difficult, and now I’ll have to remember another dosage.  I thought about setting a time on my phone, but that won’t be very helpful because he doesn’t eat at the same time every day.  He eats in increments, not necessarily specific hours of the day. I really need to figure out a way to keep myself better organized with all of this.  Then, figure out how I’m going to continue doing that when I return to work. (AGH! Can’t think about that right now!)

He was impressed with his weight gain, considering that most children with GERD lose weight or stay stagnant because they are constantly throwing up their food.  This was once an issue, and was becoming more of one prior to the probiotics.  I believe it’s also helped that I’ve slowed down his feedings and that I stop to burp him often (about every ounce).

I felt like it was a good visit. I’m interested to see if giving him the Zantac 3 times a day will help him.

I made an appointment today for him to see the chiropractor.  Our appointment is tomorrow afternoon. I’ve heard a few people say they had success in it helping their child with GERD.  I’ll let you know!

He slept a lot today, but I think that’s to be expected with all the shots.  I just let him.

I took a trip to the dry cleaners today to drop off some of Michael’s clothes.  That, and our dry cleaning people have been begging to see him.  It was really cold today and as soon as I brought him in she commented how shocked she was that I brought him out in such cold weather, and that I should have kept him home.  I bundled him up so well! The kid had on a fleece suit, thick socks, gloves, hat, and jacket, PLUS a blanket. He was definitely cozy.  I hate that people don’t think I’m smart enough to know how to dress my kid for the weather.
Oh well.  I should stop getting so offended at the comments of other people.  Nod your head and agree, Brittney.

I decided tonight that I really wanted to make brownies.  Of course it wasn’t an idea that struck me when he was sleeping! I mean, that would’ve been just way too convenient! Nope. The idea came to me JUST as he was about to wake up.  I’m so smart.  I put him in the Bjorn, mixed all of my ingredients and went about my business.  He was so unhappy, but I couldn’t just leave everything sitting out with the oven on. (Plus, I REALLY wanted brownies!) I continued to make everything through him kicking and screaming.  Chocolate was flying everywhere, and falling on the floor, which the dogs loved.  We all know dogs can’t have chocolate so I was trying to ward them away with my feet while Blake continued on. Then Michael called to tell me he was home from work, the stove beeped telling me that it was now preheated and ready.  I spilled half the mix on the counter and nearly sprayed myself in the eye with the cooking spray for the pan, barely missing Blake and I.  As I was mixing all the ingredients I was bouncing up and down trying my best to calm him.  I’m not very good at multitasking, so bouncing UP and DOWN and trying to mix a bowl going ROUND and ROUND was confusing.  Either my hips wanted to go round and round, or my hands wanted to go up and down.  I finally gave up the mixing and just hoped that what I had done so far was good enough.  I quickly dropped the mix into the glass pan, threw it in the oven and let it be.  The garage door opened and Michael was home. I really wanted to have the aroma of brownies filling the house when he walked in, but I had literally just placed them in the oven so that didn’t happen.  Oh well.
Half the pan of brownies are gone, so I guess there were no chunks of unmixed batter in them.  Or if there were Michael was nice enough to not say anything to me.
How the heck do people cook dinner with an infant?  Holy cow.
I’m the worst cook ever, so even if cooking while having an infant were easy I’d still make a disaster occur anyway.

Overall, things are going well.  That isn’t to say they’re perfect, but when is THAT ever going to happen?  I have the rest of his life to watch him be imperfect. 😉 But, I think he’s doing pretty good.  Last night was a little rough before bed time.  And he had a rough morning, but all things considered he’s come SO far.
I’d like to say that I feel less tired, but I’m not sure if I’ve just gotten accustomed to it all or if I’m actually getting more rest.  It’s hard to say.  It’s also not worth thinking about. I’m never going to get the rest that I once did. It seems like those days are are so far in the past. And I’m okay with that.