Usually he’s good at night, but he was experiencing some fussiness and discomfort.  I was EXHAUSTED the next day! I had a conversation with Mr. Blake explaining mommy was tired.  I had to set him down for a few moments to let myself calm down because that high-pitched scream can get to you in ways you never thought possible.

It was bad.  We had family visiting from out of town and they could hear him crying in the middle of the night from the guest bedroom upstairs.  This was one of those times when the yoga ball wouldn’t help, and every drop of formula that went down was causing him extreme discomfort.  It’s times like this that he gives up on eating completely, which is why, I’m sure, he woke up so many times in the night.  He was hungry, but didn’t want to eat.  When I burp him I can hear a very “wet burp” and it makes him cry even more.
So, Zantac, you clearly aren’t performing your duties fully.

For the past few days he’s been crying during feedings again.  He screamed during his bottle last night and this morning.  He wouldn’t even finish the bottle because it was hurting too much.  He ran out of his Zantac last night, so I tried to go to Publix to refill but they won’t refill it until tomorrow.  His insurance company said it’s too soon for his scheduled refill.  Made me so mad!  He ran out sooner than expected because sometimes he spits it out, so we have to try a second, and third time.  You’d think they could make it tastier! Also, I maaaay have spilled 1/4 of the bottle.  Ooopsies.  That didn’t seem to matter though, as they still wouldn’t refill it.  It’s one freakin’ day, though.  COME ON!  Ugh.  We’ve just started putting it in his bottle with only 1 oz of formula to ensure he’s getting the full dosage, and so there’s no more waste.  So much easier!  Took us some time to realize we could do that. Duuuh!
Despite not being able to fill it until tomorrow, I still feel that the Zantac isn’t 100% doing its job.

I am starting him on a probiotic.  Initially I wanted to go with BioGaia because the reviews are EXCELLENT!  I first tried to get it from a local store so I wouldn’t have to pay for shipping online.  I called Target, Walgreens, The Medicine Shoppe, CVS, GNC, Vitamin World, Vitamin Shoppe, and Wal-Mart. None carry it.  I did a lot of research on it and found that it has to be stored at 70 degrees, so I’ve become concerned about ordering it online and it not being shipped properly to be kept at the appropriate temperature.  Publix has a variation called FloraBaby that I think I’m going to go with because I can just pick it up and store it at the right temperature myself.

The reviews on FloraBaby are just as good. This one is different than BioGaia in that it’s in powder form, so we’ll have to mix it in with his formula.  Supposedly it tastes good, so that’s a plus! I really hope it mixes well! Some of the reviews say it made a world of difference in their child with colic and GERD.  Sounds right up our alley!
I’ll report back on the FloraBaby.
We’ve been giving him this Gripe Water when he’s, well, gripey.

My only complaint is that the syringe it comes with sucks.  (No pun intended.)  At his age he’s to take 5mL, but the syringe only goes to 2.5, so we have to fill it twice.  It just makes it a pain. I made the mistake of giving him all 2.5mL at once in his mouth the first time and he nearly choked.  Yeah, that was a bad mistake.  Learned my lesson.  Now I give him VERY small “squirts” at a time.  He really likes the taste, so there isn’t much of a problem with him spitting it out.  (Hey Zantac people, you could learn a thing or two from Little Remedies!)
Today has been rough.  He’s cried so much his eyes are swollen.  It’s a painful, high-pitched squeal.  That’s the only way I know to describe it.  Only relief he he and I have had is when he’s sleeping.
On a different and more positive note, Blake is still sleeping in our bedroom at night.  Tonight I’m going to put him upstairs in his crib and I’m going to sleep in the guest bedroom next door so I’m close to him. (Our master bedroom is downstairs.)  Just to get him used to this, I laid him in his crib in his room for his nap today.  (Normally he naps in a swing or in the pack & play in the living room.) I put the noise machine on and watched him from the video monitor downstairs as I did laundry and the dishes.  (He slept until 8:30 this morning so I’m feeling VERY rested. Time to do house chores! WAHOOO!!)  He slept for about 40 minutes before I think he woke up and realized “Oh crap, I’m totally alone.  WWHHHAAAAAAAAA.”  I’d say that was successful for his first time! Hopefully tonight goes just as smoothly.
Isn’t he so cute? 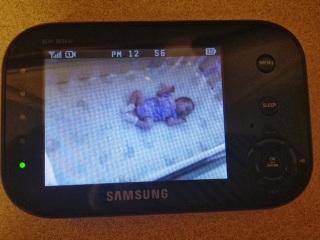 I really like our Samsung video monitor. You can get the product from Target here!

All the other changes I’ve made are working.  I think had I not tried the other things then we’d be worse off.  Still have a ways to go.  On Thursday he’s going for his 2 month checkup.  I’m going to mention how unhappy I am with the Zantac, and we’ll see where we go from there.

One thought on “Mama Said There’d Be Days Like This”