I know some days are going to be better than others. Today,  unfortunately, was not one of the good ones.

Blake cried the majority of the day…when he wasn’t sleeping.  At noon his screaming became so loud and unbearable that I took him upstairs and laid him in his crib, and walked into my office (the next room over) to work on my computer.  I just had to set him down to catch some relief.  Eventually he cried himself out and started drifting off to sleep.
It broke my heart to listen to him, but my sanity needed to take a rest. I went into my office, took a stuffed animal and threw it against the wall.  Something breakable probably would’ve caused me some instant relief, but I was glad I chose an object that wouldn’t cause harm to my house.
After he’d calmed down, I went to his room, picked him up, and went back to my office and laid on the guest bed with him.  He stared at me with this big, beautiful eyes, and my heart just melted.  I held him in my arms, staring at him, and he somehow found my hand and gripped my index finger.  I swear in that moment he was speaking to me and saying “Mommy, I’m really sorry.  I love you.”  Gosh, how I love this child.  I spoke to him, with tears streaming down my face, and said “Mommy will do everything she can to fix you and make you better.”  I laid back on the bed, placed him on my chest, and together we took an hour long nap.  It’s moments like those that I could freeze forever.
He has been on the Nutramigen formula for 24 hours.  From what the doctor told me yesterday, I should see some kind of improvement.  Truth is, I’ve seen nothing.  In fact, he’s never cried as much as he did today, so in a way I feel like it’s worsened.  He screamed after each feeding, as if he was in pain.
He’s still only eating half of his normal amount (2 oz).  This evening he ate 2 oz and spit up about half of it.
I’m starting to think the Nutramigen isn’t solving his issue.  I’m considering calling his doctor tomorrow to communicate the fact that I’m seeing no improvement.  Additionally, I’m concerned he may be losing weight since he’s eating half of his regular meal.
I tried my best to console him today with everything I knew.  I even made a checklist to keep on the refrigerator that will be an easy reference of things I can try to get him to calm down. 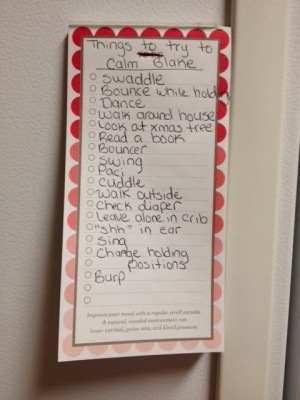 For a few minutes I was able to use some of the things on this list that gave us both temporary relief. (And by temporary I mean 10-15 minutes max): swaddling and burping.
At one point I swaddled him, he fell asleep, and I was able to place him in his bouncy chair long enough for me to get a shower.  I placed his chair in the bathroom with me so that I could keep an eye out on him and hear him if he began to cry.  It was a lengthy shower-warm and luxurious!  I prayed to God while I was in the shower, asking him to help us, and asking him for patience.  I may have also asked for a break long enough to last me a long, hot, shower. 😉
I have no idea how long I was in there but I felt my fingers start to wrinkle so I figured it was time to get out.  Just as I finished drying off, little man woke up crying.  I did feel relaxed though!  I was thankful to God for answering my prayers and allowing me to have some “ME” time.
I dropped his stool sample off at Lab Corps today.  It could take between 5-10 days to get the results.  His stool is no longer black, so I don’t think they are going to find anything out of the ordinary, but I’m still glad they’re testing it.
I’d like to pretend this isn’t difficult.  I’d like to say that when people ask me how mommyhood is and how things are going that I can put on a smile and say everything is great!   I keep wondering are people judging me for being honest?  I don’t want to be the person who complains all the time.  Yet, there’s another part of me who wants to be forthcoming because I’ve already been able to connect with people who are or have gone through the same thing.  It’s nice to know you aren’t alone.  Not that I ever thought I was…

5 thoughts on “Too Soon To Tell”